Dr. Richard Hughes Named an Honored Fellow of the American Academy of Implant Dentistry By erhughesdds on March 05, 2015 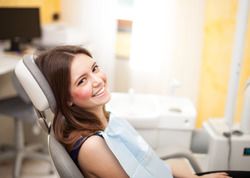 Sterling, VA - The American Academy of Implant Dentistry (AAID) named Dr. Richard Hughes one of its 2014 Honored Fellows during the organization's 63rd annual meeting last November. This coveted distinction was awarded to eight dentists based in the United States and Canada. The credential is for dentists and dental health professionals who have distinguished themselves within the field of implant dentistry.

"This is the kind of honor that I never thought I would achieve," said Dr. Hughes. "I was overcome. It's such an elite group to be a part of, and I am humbled to be among those seven other names from around the world."

Being an Honored Fellow Is a Great Achievement

All Honored Fellows were nominated for the distinction by peers in the field of dentistry. Only voting members of the AAID in good standing with the organization for at least eight years are eligible for this honor, which demonstrates a long-term commitment to the group as a whole and the evolving field of implant dentistry.

How This Honor Impacts Dental Patients

Patients who visit Dr. Hughes can expect high-quality care by a leader in the dental care profession. The honor is an affirmation that Dr. Hughes' work has enhanced his patients' lives.

"I have served my patients well, and it's something I am going to continue doing," said Dr. Hughes. "The honor doesn't mean I'll rest easy. It means that I will strive even harder, because my commitment is to patients and their wellness."

About the American Academy of Implant Dentistry (AAID)

Established in 1951, the AAID was the first professional organization in the world that was dedicated to the field of implant dentistry. A trusted name in the field, dentists who are credentialed by the AAID are recognized by numerous state boards for their excellence in the placement and use of dental implants.

The AAID is comprised of more than 4,500 members. While the majority of the membership is based in the United States, the AAID also has a number of members based in Canada and elsewhere around the globe.

Dr. Richard Hughes is one of the leading implant dentists based in the greater Northern Virginia and Washington DC Metro area. Dr. Hughes has trained with some of the foremost implant dentistry specialists in the world, and passes on his knowledge to his peers through post-doctorate courses and lectures. Dr. Hughes is an advisory board member for The Journal of Implant and Advanced Clinical Dentistry, a reviewer for The Journal of Oral Implantology, and an oral examiner for the American Board of Oral Implantology.

Dr. Hughes is a member of the following professional societies and organizations:

To schedule a consultation and to learn more about implant dentistry, contact Dr. Richard Hughes. Dr. Hughes' practice can also be reached at: Dr. E. Richard Hughes is a renowned implant dentist who has been caring for patients of all ages since 1987. Throughout his career, he has earned several distinctions:

You can schedule a consultation at our Sterling, VA, office today. Contact a member of our friendly staff online or by calling (703) 444-1152.

*Disclaimer: results are not guaranteed, may not be permanent, and can vary per individual. Some images are of models, not actual patients.